Social media platforms keep adding new features to ensure brand and feature evolution based on well-researched user needs and behaviours. We know sometimes it is difficult to keep track of new or removed features. So, here is the latest round-up on what has changed lately.

Facebook now allows some selected Business Pages to share branded stories. Earlier on, this feature was only enabled for personal profiles. It is believed that Facebook is testing the response of fans to Business Pages’ FB Stories. This roll-out has not officially been announced by Facebook. Sphere Media will keep you posted through our blog if Facebook ever officially rolls out FB Stories for all Business Pages.

Facebook has now added the ability of capturing 360 photos on mobile.

Within the latest versions of Facebook mobile app (both IOS and Android), its users can now capture 360 photos and instantly upload them to their timeline, albums or groups and use them as a cover photo on a personal profile.

It is important to note that this new feature is also available for Business Page but not via Page Manager app. Facebook has started to roll out zooming into 360 photos and spatial tagging, which gives users the ability to tag friends within a 360 photo on the desktop. 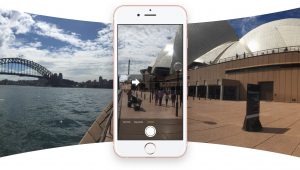 Facebook recently added the ability to go Live on its camera. Along with this new feature, users can shoot two-second GIFs and share full-screen text posts on colored backgrounds directly from Facebook Camera. These videos and images can then be shared to Facebook Stories, direct messaging and the normal newsfeed.

LinkedIn globally rolls out video but only on its mobile app!

LinkedIn has recently released its new feature to all its members and it’s now available on mobile for both iOS and Android. Members have the option to natively record a video or upload a previously recorded video. They’ll have access to Audience Insights such as the top companies, titles and locations of viewers, as well as how many views, likes, and comments their videos are receiving.

Google rolls out mini videos on its search.

The importance of videos to users online makes Google roll out this new feature. Silent 6 seconds video preview will now appear within Google mobile search results pages to help users identify the videos they really want to see. This will work for the vast majority of videos available online, including but not limited to YouTube.

WhatsApp has recently launched different fonts, colourful background options and links to text status updates. This new feature is still being rolled out to all users.

Social Media platforms keep changing to adapt itself to what’s working the best with its users. However, the key is to use these features correctly.

Need to define your Digital Brand Positioning and Marketing Strategy? Contact us on 433 8020, Facebook or on digital@spheremedialtd.com.