Round up of Facebook’s new features – Pt 1

New ways of engaging with your audience and even your friends

Facebook Marketing with the newly added features gets even more interesting for marketers. The social media giant keeps innovating with new features that you suddenly realise you always needed. We know it’s a bit difficult to keep track of every feature that Facebook launches. We’ve done a summary of the latest features Facebook developers created (or are about to launch). No FOMO, simply read on!

After the Live 360 Videos, the next big thing to come is Live Audio. Going Live is now a trend and Facebook handles that well. That’s why Facebook is giving you a new means of going Live. Facebook Live Audio is simply a Live Video but without the video component. This might be the tool that shy and introvert persons would like to use to go Live.Beside, this might be the new 2017 social media trend.

With Facebook Live Audio, there is no real need for a makeup retouch or to check your surroundings for any “intruder” items that may just be lying around. You just need a cover image and that’s it. Speak out whatever you want (hmmm…) and attract listeners who can still scroll the Newsfeed or do some other stuffs while listening to you. Facebook Live Audio allows multitasking.

What is good about this new feature is that you can share your voice or listen to a broadcaster despite having a poor internet connection. You can even react, comment and share Live Audios on Facebook. Now, all that is left to do is to go Live.

The latest update introduced GIF in the comment section coinciding with the 30th anniversary of Graphic Interchange Format. After several tests, Facebook has decided to introduce GIF in its comment section. Many Facebook users like to use GIF in their comments and until recently had to upload it from external pages. This just opens up new opportunities for Facebook Marketing. 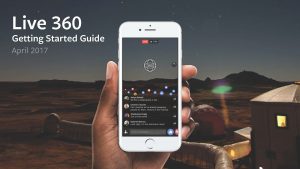 Facebook Marketing just shifted to the next gear. Lately we seem to have been bombarded with about 25 million ‘360’ photos and 1 million ‘360’ videos available. This new way of watching videos and photos is highly cherished by users. How about having a single platform where all live 360 videos and images are waiting for you. Well, Facebook 360 app is meant for that purpose. With Facebook 360 app installed on your device and a VR headset, you are ready for an amazing experience.

Message Reactions and Mentions for Messenger

Communicating with friends is even more interesting with the introduction of Message Reactions and Mentions for Messenger. Whether you are communicating in a group chat or individually, you can make use of Message Reactions and Mentions. Similar to reactions on the posts in your Newsfeed, through Messenger Reactions you can drop a ‘Love’, ‘Haha’ or any of 5 other reactions to a particular text, image, video, GIF or link someone sent you.

Mentions are mostly used in Group chats where you can target a specific person. We all know how confusing it can be in a Group chat. Half of the time you are not sure if that question was addressed to you or to your friend. If the text you are about to send is targeted to someone specific in your Group chat, just add @ before the name of that person and voilà. No more confusion!

It is an undeniable fact that people are always worried about their friends and relatives. Through Facebook Analytics, “where are you?” and “where have you reached?” were identified as the 2 most frequent questions asked on Facebook. Hence, Facebook developers came up with a feature called Live Location.  Facebook Live Location allows your friend or group of friends to know your real-time location for a period of 1 hour. It allows you to share where you are with your family or friends, whether you are having a nice time at the seaside or enjoying good food in a restaurant. You can also locate how far your friends are from you whenever you make plans to meet at a place which is not familiar to all.

Facebook Marketing keeps getting more and more interesting. The key is to use the new features correctly. Watch out for Part 2 of this article.

Need to define your Digital Marketing Strategy? Contact us